You’re an asshole.  Most of us think so, but sometimes it just needs to be said out loud.  You aren’t our “favorite President,” as you frequently claim on Twitter.  You’re not our favorite anything.  And you won’t be until you become our favorite “former president currently serving a lengthy prison sentence.”

You became president by riding the movement and momentum of the very worst parts of American society – our fears, our latent (and not-so-latent) racism, and our xenophobic, isolationist impulses.  But no movement has carried you aloft more than the Evangelicals. 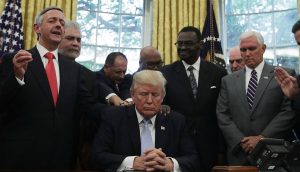 Just as anyone who opposes their version of Christian sharia is automatically a “sinner,” you’ve convinced them that any media report that reveals the truth of your corruption is “fake news.” And now they’re deciding for themselves what is fake based on their ideology.

It sickens me to hear chants of “fake news” from people who are fake Christians.

There’s nothing Christian about calling for the execution of innocent young black men.  Jesus wouldn’t turn away refugees seeking asylum.  Christianity doesn’t condone concentrating wealth and power in the elite while the poor and underprivileged suffer.

Like every good conman, you’ve exploited their weak character and latched onto their laziness.  Evangelicals eschew reason and logic, clinging to a rigid interpretation of a two-thousand-year-old book to tell them what’s right and wrong.  Of course they’re going to look to you as a messiah-type! You make it easy for them to not have to think for themselves.

And while you’ve gamed the system to gain their approval you’ve opened up the coffers of the Evangelical piggy bank.  Church leaders who crave nothing more than power perform the most blatant sleight of hand and redirect their lemmings’ attention from your incompetence, corruption, and abuse of power and toward insane conspiracy theory talking points, whataboutism, and papier-mâché justifications. 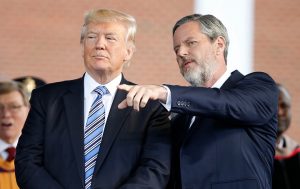 You feed the fundamentalists sound bites to parrot that mimic their narrowminded worldviews.  You promote their fondness for Fox News, where they lap up propaganda and feed on your lies.  The message is touched with the faintest hint of fact so they believe they know what’s going on.  And when they applaud your “plain talking,” it’s really just validation of the hateful, ignorant, racist, homophobic, xenophobic things they’ve always thought but never had the courage to say out loud until you came along.  The same people who shrug at your exponentially compounding indiscretions went berserk when your predecessor wore a tan suit.

So yes, you’re a pompous asshole with no moral compass.  But you’re also propped up by morons so consumed by their selfish apocalyptic delusions that they can’t see that you’re everything they purport to oppose.

WWJD?  He wouldn’t recognize your supporters as his people.  He wouldn’t think you were sent by his Father to bring greatness to America.  He’d wear a pussy hat and march against you.  He’d put on a burka in solidarity with the people you’ve banned from entering the country based solely on their religious beliefs.  He’d scale any wall you build along the border to lend a hand to anyone seeking refuge.

And he’d damn well make sure you were impeached and removed from office for your many transgressions.  If Jesus is watching all this unfold, you can be damn sure He’s kept notes on anyone who enabled, protected, defended, or supported you in His name.  And I bet He’s pissed.

The best Cyber Monday deals and discounts on Amazon.

This letter was submitted to the ‘Open Letters’ series. If you would like to contribute by writing a letter of your own, please contact Greg at [email protected]