In a video posted to Facebook, the former Wallabies player described the fires as a “little taste of God’s judgement” during a sermon at a Sydney church on Sunday.

This isn’t the first time Folau has made his homophobic views clear. Rugby Australia (RA) sacked the Wallabies player in May after he said on social media that “hell awaits” gay people. 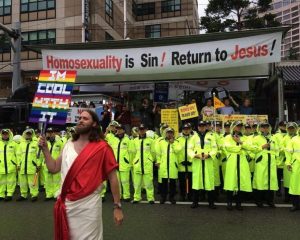 Marriage equality in Australia has been legal since 9 December 2017.